Wild Mushrooms
of the Pacific Northwest

Abe Zweigel, my great uncle, came from Ostrava, Czechoslovakia, (now the Czech Republic) to the United States around 1900 as a young man. Ostrava was part of Austria until 1918 after WWI was over, then became part of Czechoslovakia. He eventually brought most of his immediate family members over. Over the years Abe also sponsored many other people so that they could come to the United States. In 1923 he sponsored my grandparents, which included my father, who was then 10 years old.

When Abe arrived in New York, he knew no one, had little money, and could not speak a word of English. As soon as he had enough money from various odd jobs, he invested in books to teach himself. Although he mastered the language, in ensuing years he always kept his finance books in German, the language of the region he came from in Czechoslovakia.

About 1904, he settled in Atoka, Oklahoma, because this part of the country was a good place to peddle goods, and being a large territory there wouldn’t be much competition. Oklahoma didn’t become a state until 1907. He went from farm to farm on foot with a pack on this back selling items such as thread, needles, thimbles, combs, knives, pencils, and shoe strings. There was never any difficulty finding a place to stay for free overnight with some family on his route, even though it might be in some farmer’s barn. Not only were his wares attractive to farmers and housewives, Abe was a traveling newscaster. In those days before radio and daily newspapers all news of neighbors and politics was of special interest.

Abe succeeded slowly, but surely. Within a few months he had saved enough money to rent a horse and wagon to carry his wares. This enabled him to expand his business from small items, to pots and pans, bolts of cloth, and tools, and cover much more territory each day.

When Abe became financially able, he rented a building and opened a second-hand furniture store. After he had saved one hundred and fifty dollars, he took the train to Fort Smith, Arkansas. Walking into a furniture company, he laid down his one hundred and fifty dollars and boldly asked for five hundred dollars worth of credit for the purpose of stocking his store with some new furniture. To his surprise they gave it to him.

During those early years, he saved and paid the passage for his parents and six of his brothers and sisters to come to America. He had 3 sisters and 4 brothers. He even financed the education of one of his brothers through medical school. He later sent for his future bride who came all the way from Austria. 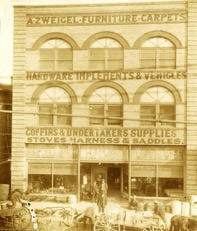 As Abe’s businesses expanded he became a pioneer in volume buying in Oklahoma as he bought in carload lots for all three of his current stores. He operated one of his stores in Atoka until 1911, then he built a three-story building close by (the Zweigel Skyscraper which was 3 stories tall, a really tall building for its time and place) and sold furniture, hardware, buggies, appliances, and caskets on the first two floors, and operated an undertaking business on the third floor. With frugality and wise business decisions, he prospered.

In addition to his success with the hardware store and mortuary, he began to invest in local real estate and farmland. He extended credit to farmers, waiting for payment until crops were harvested. If Abe felt the farmer was able to pay interest on his loan, then he charged it. If he felt that he couldn’t, none was added. He then got involved in the oil exploration business and began leasing out his land to various oil drillers.

Abe served on the board of directors and was the controlling stockholder in the Atoka State Bank for many years, and the one who authorized loans there. In spite of his wealth, Abe and his wife led a very quiet life, but they were always generous to those in need, and to causes they felt worthy of donation. He donated generously to the Atoka Memorial Hospital when it was built in 1959, and when he died he left a continuing legacy to the town in which he had prospered. In the early days after Israel was founded, he gave a large sum of money for planting trees in what was to be the “Zweigel Forest.” Abe was a firm believer in soil conservation and received a Farmer’s Award at one of their annual banquets for his contributions to this cause.

At the time of Abe’s death in 1968, he was about one hundred years old, and at least a millionaire, a far cry from the peddler who started with a pack on his back years before. When once asked how he acquired his wealth, he told a friend, “Well, I never spent more than I made each day. If I made a nickel profit, that’s how much we had to eat.” He once told me, “young lady, if for every fifty cents you make, you will save twenty-five cents, someday you will be a rich woman.”

“Abe” as everyone called him, usually dressed in a 3-pieced suit, was very dapper looking, with white hair in later years. He went from a poor Jewish boy in Austria to a millionaire in Oklahoma. He worked hard and saved, which allowed him to leave a lot of money to charity and other worthy causes. In his will Abe left part of his estate in a charitable trust to the non-profit “A. Zweigel Foundation,” so that he could continue giving to worthy causes long after his death. It is the intent of this website to continue this practice.

Proceeds from this project are earmarked for mycological foundations including the Daniel Stuntz Foundation, and the Jay Marston Foundation at Lane Community College for science scholarships. Also NAMA (North American Mycological Association) and other mushroom clubs will be recipients in order to give scholarships to students pursuing studies in mycology. Additionally, proceeds will fund further development of educational material appearing on this website.